Russian firefighter seaplane Beriev Be-200ES registration: 21512, serial number: 7682000003, conducts several seawater intakes in the Strait of Chios during firefighting operations in the northwestern part of the island. NS01:15 you can see the longest water intake we recorded. Among other aerial firefighting assets, the Be-200ES is leased by Hellenic Civil Protection.

The Be 200 is a very good Russian aircraft and could be useful in many other European countries. It's just obsolete because of some stupid policy.

It fills up faster than expected... 12 tons of water, twice the capacity of the Canadair CL415. But the latter is more maneuverable on cliffs and slopes. 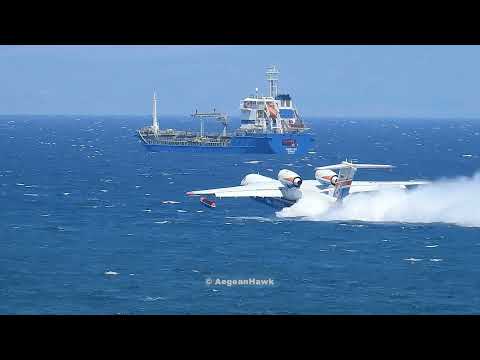